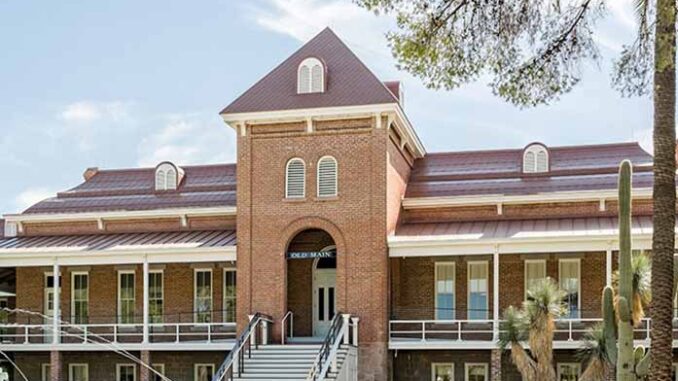 The University of Arizona (UArizona) will award one future college credit to individuals who play their informational version of the popular Age of Empires video game, called “Illuminated Histories.”

UArizona partnered with Microsoft to create the modified game. History department head and associate professor of Roman history Alison Futrell, a self-described fellow “gamer,” will teach the course alongside associate professor of medieval history Paul Milliman. Milliman described the course as the first step toward an online B.A. history degree.

Age of Empires is an acclaimed series of nine video games and several spin-offs, with the first game released in 1997. A principal designer for the original game series, Bruce Shelley, said on his Microsoft Games profile page that the developers relied mostly on children’s books to concoct the historical basis of the game. He dismissed the idea that the game relied on extensive, detailed research, instead characterizing it solely as a strategy game.

“The research for Age of Empires was done in the local community library. Extensive, detailed research is not necessary or even a good idea for most entertainment products. The best reference materials are often found in the children’s section because this is the level of historic interest for most of the gaming public,” said Shelley. “If you build in too much historic detail you run the risk of making the game obtuse. The players should have the fun, not the designers or researchers. We are trying to entertain people, not impress them with our scholarship. The words ‘model’ or ‘simulation’ are often a warning signal that the game is not fun.”

In a separate panel interview years later, Shelley clarified that history wasn’t the main point of the game, but rather “human experience.”

“The games aren’t so much about history but about the human experience, which is not just what we’ve done and what we are doing, but what we might do,” said Shelley.

“We love to study the role of games in the premodern world: exploring how they’ve impacted human society and individual lives over time. Games connect the past, present, and future in a way that makes them ideal for teaching and learning history,” said Futrell. “History begins with wonder, which is why you will have opportunities to dive deeper into the history surrounding Age of Empires IV. If you’ve ever wondered about topics like medieval medicine, the role of women warriors, or the culture of the Mongol empire – professor Milliman and I have written ‘Illuminated Histories’ from the University of Arizona to help you engage with the historical sources.”

UArizona’s latest recruitment campaign, first reported by Arizona Daily Independent, came out a day before the Arizona Board of Regents (ABOR) announced a significant low in college enrollments. The latest ABOR report noted that about 46 percent of students went on to enroll in a two- or four-year college degree in 2020. Based on declining college enrollments, college completions, and high school completions, ABOR estimated that less than 17 percent of current high school freshmen would graduate from a four-year college.

“This is a concern because educational attainment is a primary factor that impacts the quality of Arizona’s labor market and the state’s ability to compete regionally and nationally for high-paying employers and jobs,” stated ABOR.

According to a 2018 study, the majority of those who played video games graduated from college. A vast majority of the remainder had completed at least one or more years of college or graduate school at the time of the survey.

UArizona hasn’t been the only university to turn to video games to increase the appeal of a higher education. In recent years, universities have begun to offer scholarships for competitive video gaming, called “esports.” The 2018 championship game for League of Legends, a multiplayer game, reached a peak of 200 million viewers – more than double than the last three Super Bowls. The League of Legends championships normally pull well over 100 million viewers.

That potential success that governing bodies like the National Collegiate Athletic Association (NCAA) are considering the addition of esports to their purview.