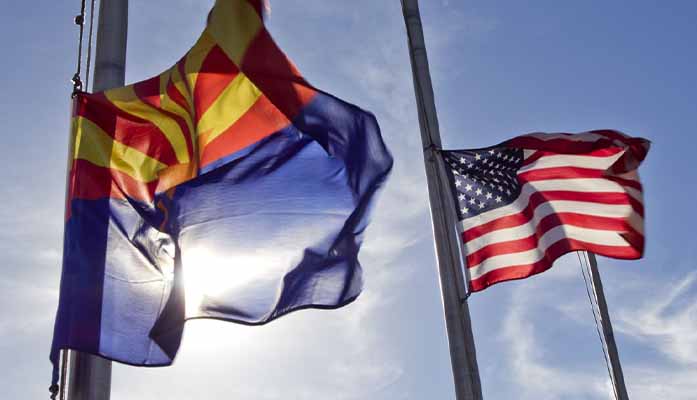 PHOENIX, AZ — Governor Doug Ducey ordered flags at all state buildings be lowered to half-staff tomorrow, Saturday, September 11, in remembrance of the nearly 3,000 innocent men and women who lost their lives in the terrorist attacks of September 11, 2001.

Also on Friday, Governor Ducey announced plans to work collaboratively with the State Board of Education and key stakeholders to present a bill during the next legislative session that will guarantee Arizona K-12 students, who were not alive on the day of the attacks, will receive instruction on what occurred on September 11, 2001 and the impact it has had on the American way of life.

“Today, we send special thoughts and prayers to the families of those who lost a loved one as a result of the 9/11 terror attack on our nation. And we remember and mourn the life of Gary Bird, the sole Arizonan who was killed on that horrible day,” said Ducey. “We also honor the many first responders—from Arizona and around the nation—who answered the call of duty when their nation needed them most. This tragic day would just be the beginning of a two-decade long war that wouldn’t end until just recently.”

The governor called on his fellow Arizonans to join him “in remembering the fallen from this day. And join me in honoring our troops, who fight for a future in which such a terrible event never happens again.”